How Education Should Be? (Salman Khan)

In this post, we will have a look at the viewpoint of Salman Khan on this. No! Not the man who plays Prem on screen. Here, we are talking about the founder of Khan Academy. The man who feels that if the result of putting x = π in the Euler’s formula does not blow your mind, then you have no emotion. 😛

Due to distance barriers with his cousins, Sal (as he is fondly called) started putting his Maths tutorials on YouTube for his younger cousins. As he says, after he put the videos on YouTube, many interesting things happened. In one of those incidents, his cousins told him that they preferred him on YouTube than in person.

Initially, it might have sounded offensive but looking from their point of view, it made a ton of sense to him. They could now pause and repeat the automated version of their cousin, without feeling that they are wasting his time. They could now watch a video about a concept that they should have learnt a week or a year ago, without having to feel embarrassed about it. This actually defies the assembly line culture of the usual school level education system and promotes learning at one’s own pace.

With time, as his videos started gaining a lot of attention from people other than his cousins, a realization dawned on him. He realized that these videos will never go old. These could not only help his cousins and the other people who are watching these now, these could also help their children or grandchildren. In a TED Talk that he gave, he said

“If Isaac Newton had done YouTube videos on Calculus, I wouldn’t have to. Assuming he was good.”

After that, it did not take long before he left his job and founded Khan Academy.

Some teachers have used his videos to Flip the Classroom. The lectures given by Sal are already there on his website. So, they assign viewing the lectures as homework, an activity which was earlier done in the classroom. As a result, what used to be homework earlier, like solving a set of problems based on the taught concept, is now done in the classroom. He wants this teaching method to be implemented in every school in the USA. According to him, this teaching method has two benefits.

Now the teacher can actually act as a facilitator, helping the students who are stuck in a certain section. Even the students who have understood the section can help their peers to solve the problems that they have gotten stuck at.

Salman Khan feels that the current method of assessment in schools is not justified. According to him, declaring a student who has scored 60% in a test on a concept as ‘Passed’, is like giving a person who can’t take left turns on a bicycle, a unicycle. What about the 40% that the student missed or could not understand? Maybe something out of that 40% deficiency, which he/she did not learn, is a very important concept to understand something later. Now the deficiency will start multiplying, demotivating the student from trying to learn new things later on. This can be prevented by adopting the notion of Mastery Learning. It means that the student should keep trying (with continuous assistance from teachers) until he/she fully learns the concept. If a student is able to solve 10 problems assessing the understanding of a concept in a row, then it is assumed that the student has mastered the concept. 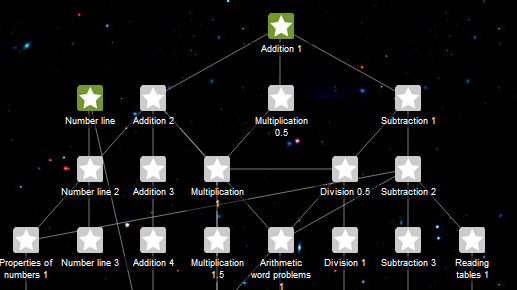 Khan Academy also uses the notion of the Hierarchical Individual to make a Knowledge Map which helps the teachers and students to understand that which concepts they should learn and master before trying to understand a new concept. For example, a student wanting to learn Linear Equations in maths should obviously learn and master concepts like addition and subtraction. A student is not allowed to proceed to a new concept in the Knowledge Map until he/she has already understood and mastered the lower level concepts. Yes, there are subjects in which this philosophy might not work that well. But in subjects like maths, English grammar, genetics, computer programming, etc. this can actually produce great results.

Using the notion of Flipped Classroom, Mastery Learning, and Hierarchical Individual philosophy, Khan Academy has built an amazing piece of software. Using the software, students can solve as many problems related to a concept as they want. A student is not penalized for experimenting and failing in this model. Mastery of a concept is expected from a student, but by allowing him/her to experiment and fail as many times as he/she wants to. This approach frames a student’s mind in such a way that he/she is not afraid of making mistakes. This approach prevents the system from curbing the creativity of students.

It is also used to help teachers in schools access data, giving them information about the different concepts a student has mastered and the concepts that he/she is stuck at. All this happens while each student in the classroom is working on the problems at his/her own pace. The data also gives the teachers information like the time spent by a student on each problem, the time spent by him/her on each video, the problems that he/she got right, the problems that he/she did not get right, and the videos and the exercises he/she has focused on. By giving the teachers access to so much data, Khan Academy has facilitated the diagnosis of a student’s problem areas. He doesn’t claim that only solving problems is complete Maths education. But using this approach frees up time for simulations, games, etc. which can enhance the educational experience of a student according to him.

0 responses on "How Education Should Be? (Salman Khan)"